Today, we celebrate Martha Feldman as EGOS Honorary Member 2022. In celebrating an honorary member, we not only acknowledge the extraordinary achievements of that scholar, but we also ultimately highlight what EGOS stands for and the ideals it adheres to. Thus, this laudation is as much about Martha as it is about our academic association. 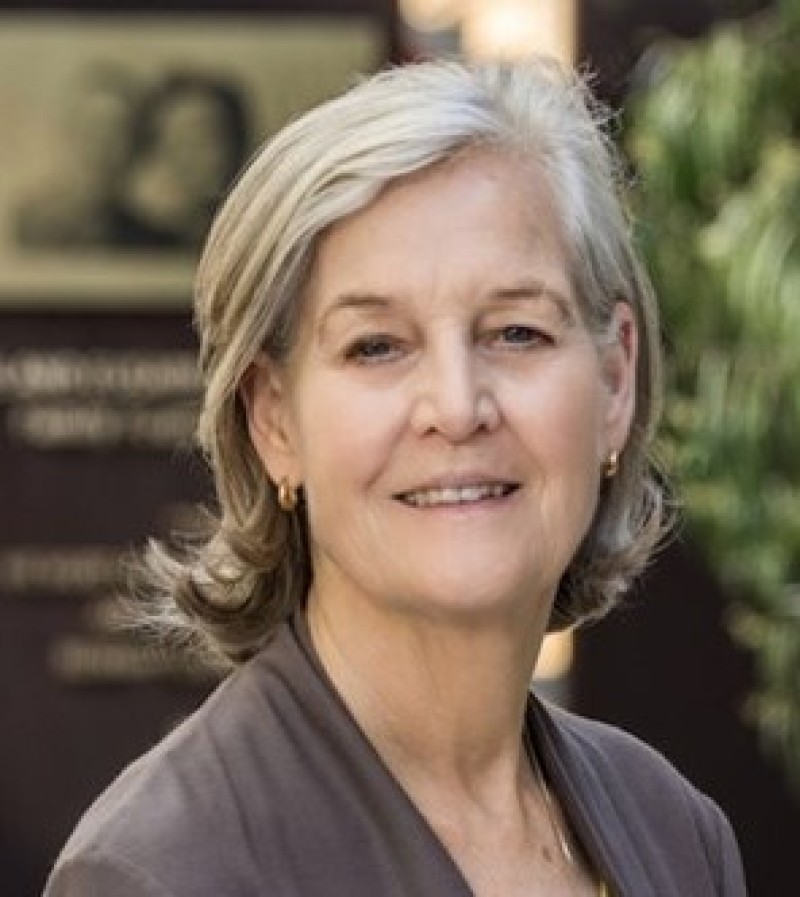 I have known Martha for a very long time. My first encounter with her took place about 20 years ago when I, as a postdoctoral researcher, drove eight hours from San Francisco to Martha’s office at UC Irvine, but in the end was too shy to contact her and instead just walked around her office trying to get energized by the atmosphere in which she was working! It took another couple of years before I had the courage to talk to her directly – if I had only known back then how approachable Martha is

In preparation for this laudation, I spent the last month interviewing her, and other people around her, trying to get a grip on who Martha really is. To be sure, I could have provided you with a tally of her many impressive achievements – the large number of papers she has published in the highest ranked journals, the enormous number of times those papers have been cited, the number of best paper awards she has received, her impressive h-Index, her two honorary doctorates, and all the other academic achievements that we tend to refer to when describing a scholar But what can this account really tell us? These numbers are changing while I am talking and, more importantly, Martha is not a number – she is the result of her lived experience. It is the “lived experience” and her focus on that lived experience that makes her unique – and this is what I want to talk about.

Martha’s life has revolved around five eye-opening experiences. Few people may know that Martha started out by studying French, with the idea of becoming a teacher. Apart from becoming a nurse or therapist, this was one of the three professions available to women at the time in Idaho, where she grew up.

As part of her studies, she spent a year in France in the early 1970s, which led to the first pivotal experience: politics as everyday life in the aftermath of the ‘68 revolution. Though her family had always cared about politics and the civil rights movement, this was a level of politics that was, as she said, “mind-blowing”; it “opened my eyes to how important politics was”. Upon her return, she therefore switched to studying political science.

As part of that, she enrolled in various courses on quantitative analysis, which seemed important if she was to be taken seriously by her male colleagues in political science. One of her professors at the time was Hubert M. Blalock, one of the key figures in quantitative analysis. Martha had many meetings with him, which led to the second pivotal experience: in one of those meetings, when Martha asked him dozens of questions about quantitative analysis, Blalock eventually slammed his fist on the desk and exclaimed: “Damn it, Martha, just assume it.” But all her questions, everything she was interested in, related precisely to what she was supposed to just assume. Thus, it dawned on her, as she said, “maybe I don’t want to do quantitative analysis”. As a result, she moved increasingly to qualitative research.

As part of this new orientation, she worked with W. Lance Bennett, who put her onto her first substantive empirical case – reality construction in the court room. This encounter with this rich empirical material led to Martha’s third eye-opening experience:  Martha realized, in her own words, that “the real world is infinitely rich and interesting and there are really cool (qualitative) analytical tools that help us explore it without diminishing its richness”. Lance and Martha subsequently published Reconstructing Reality in the Court Room based on the insights generated by the study.

The next eye-opening experience resulted from the ethnographic study that she conducted as part of her PhD thesis under the supervision of Jim March. At the time, she was working at the Department of Energy, charged with writing reports. Yet, to her surprise, she noticed that these reports were hardly taken notice of in actual decision making. She wondered: “How are things that are not appreciated so stable?” This led to her second book and her ASQ paper with Jim March on “Information in organizations as signal and symbol”.

Having become interested in routines such as report writing, Martha set out to study the stability of routines. She asked herself: What make routines so stable? What are the mechanisms of stability? She started studying the routines of residence halls at a university, which were described to her as particularly stable routines. Observing these routines over many years, she had another eye-opening experience. To her surprise, these routines were not stable at all; there were all kinds of changes and there was no theory to explain that. Trying to come to grips with what she had seen, Wanda Orlikowski suggested that Martha might have a look at practice theory as a potentially fruitful perspective for theorizing her experience. This eventually gave rise to the development of the Routine Dynamics approach as we know it today.

Martha’s research spans many different areas. Yet, there is one common theme to all of it. As Martha herself put it: “I’ve always been interested in understanding how people get things done.” There are four areas of research that stand out and which I will briefly highlight here.

In the EGOS community, Martha is probably most well-known for the development of the Routine Dynamics approach, on which she co-convened an EGOS Standing Working Group for many years. The Routine Dynamics approach theorizes routines as inherently dynamic phenomena – an idea that was ground-breaking when Martha first talked about it, but which, due to work by Martha, her co-authors and a growing community of scholars, is now widely shared.

The basis of this approach was developed in two papers – or as Martha herself formulated it: “These papers turned a key, my other pieces were working it out.” The first paper was the 2000 Organization Science paper entitled “Organizational routines as a source of continuous change”, which was based on her observations of student housing routines; the second paper is the 2003 ASQ paper with Brian Pentland entitled “Reconceptualizing organizational routines as a source of flexibility and change.” A few of you may know that this latter paper with Brian started out as a review paper on routines – and people still joke: When will you finally get this review paper done?

Another important contribution is Martha’s work on Resourcing, which she introduced in an Organization Science article in 2004 entitled “Resources in emerging structures and processes of change.” This work highlights how resources are brought into being and are specified through the actions in which they are used.

Next to Routine Dynamics and Resourcing, Martha has made important contributions to clarifying the analytic methods of qualitative research. In 1995, she published an important book entitled Strategies for Interpreting Qualitative Data (Newbury Park, CA: SAGE Publications), which marked an important milestone in her own thinking about data analysis. Many other papers followed soon after, aimed at “demystifying qualitative research”. These works have offered many important and particularly liberating guidelines to qualitative researchers, such as: “Go where the energy is”; “Listen to your hunches”; “Dizzy is good”; “Write your way to clarity”; “Describe the arrows, not the boxes”; “Dare to engage in methodological bricolage”.

Finally, there is an important area of Martha’s work that is little known here at EGOS, but quite well known in other circles, which is her work on public management. Until the interest in Routine Dynamics exploded, this work was a primary focus. Public management is still very important to her research. The key question in that work has been how managers can create processes that bring in the public; what are the practices that allow for public engagement in policy making. As part of that work, she has developed the conceptual distinction between participation and inclusion.

Central to Martha’s intellectual development is interaction with other people. She develops her ideas in conversation; “I couldn’t possibly work out my ideas without people engaging with me”, she says.

There have been a range of well-known collaborations that have proven extremely fruitful. As Martha said, “co-authorships are learning opportunities for me”. Four collaborators in particular stand out. When thinking of her work on Routine Dynamics, Brian Pentland immediately comes to mind. As he said of their collaboration, “we complement each other very well”. While Martha focusses more on the details, he is more concerned with the broader brush strokes. Martha likes to write elaborately, while he keeps things very short. Brian refers to himself as a “bulldozer” and “hedge trimmer” that Martha can call in whenever needed! Then, there are Karen Locke and Karen Golden-Biddle, with whom Martha has developed much of her thinking on analytical methods. In her work on public management, Anne M. Khademian is her key collaborator.

Beyond those established relationships, Martha develops her ideas wherever she can engage with other people. As she explained, “I usually have an inkling, and then I talk with people about it and then I am usually not very satisfied with it and then work on it again.” “These days, I give a lot of talks, and I find that those are really helpful in terms of seeing what people’s reactions to an article are.”

For Martha, engaging with other people is not only about developing her own thinking but also, and more importantly, about the community. The Routine Dynamics community that she created and cultivated at EGOS and beyond is the best example of that. An important part of its success is Martha’s genuine interest and endless patience in helping junior scholars develop and bring out their ideas. As Karen Golden-Biddle said to me: “When I think of Martha, I think of her enormous generosity.”

Martha, let me now conclude. As I said at the beginning, in awarding you the honorary membership of our EGOS community, we celebrate you as an extraordinary organization scholar, but we also highlight what we as an association aspire to. Thus, as my description of your academic life should have made clear, our aspirations as an association are extraordinarily high.

Martha, we are all proud to have you as our EGOS Honorary Member 2022!