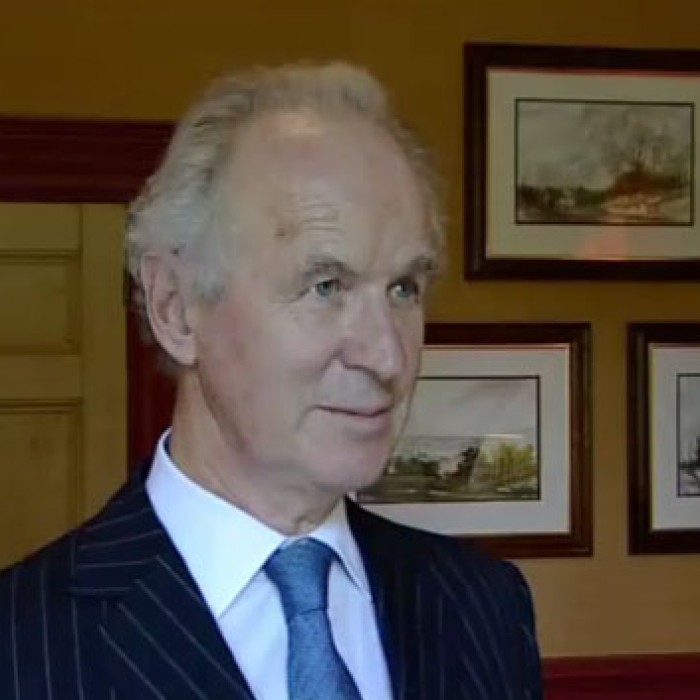 It is a great honour for me to present Professor Mike Aiken to you as an honorary member of EGOS. He joins an illustrious band of scholars who are Honorary Members, and he does so deservedly. His contribution to EGOS and to organization theory have been immense. His career, spanning more than forty years has taken him from research fellow in the University of Michigan to be Chancellor of the University of Illinois at Urbana-Champaign. Prior to that, he had been Chair of the Sociology Department at the University of Wisconsin (where he was later Associate Dean) and was then Dean and later Provost at the University of Pennsylvania.

His research has seen publications in leading sociological journals such as the American Sociological Review and the American Journal of Sociology. He has published in Administrative Science Quarterly, the Academy of Management Journal as well as the British Journal of Political Science, Accounting Organisations and Society and Urban Political Economy. He has also authored and co-authored six books. In a nutshell Mike Aiken is a great example of a social scientist bringing the mother disciplines of sociology, politics and anthropology to scrutinize and interrogate organization theory.

Mike was one of the founding fathers of EGOS. During a conference in Wassenaar, the Netherlands, Mike remarked that European scholars were quite well aware of most North American publications in their field (even minor publications) but were unaware of often major work literally across the border in another European country. The rest is history (see Organization Studies, Winter 1998, 'An Inside Story: The Birth and Infancy of EGOS' by C.J. Lammers).

Mike Aiken was a real promoter of EGOS. He had research interests in Europe (and a French wife) and he was frustrated by the fact that there was little connection among organizational scholars in Europe. David Hickson used to say that it was typical that it took two Americans to get the Europeans to talk to each other.

'An organization designed to maximize innovation will be more complex, decentralized and designed for greater levels of communication than one designed for routine efficiency.'

'An organization which employs a non-routine technology will be decentralized and more complex than one which is not.'

He argued for example:

Most Organization Theory and Empirical Research assumed and glossed over what was really central to the sociological study of organizations. For over twenty years, the search had been for generalizations – key variables which could make organizations and the management processes more effective and efficient. The concepts of industrial efficiency and productivity, once discovered, were assumed to apply to all organizations – public, private and non-profit alike. Mouzelis, Blau and Scott as well as Gouldner and others were paving the way for such generalisable characteristics. Mike Aiken, however, took the line of the sociologist. Were not the constants assumed by these scholars the very factors that sociologists of organization ought to be interested in? What was important to Mike Aiken was to uncover:

The relationships between internal organizational processes, structures and ideologies and the societal context in which they exist?

These are the very factors which reinforce, disguise or even justify inequalities, power and hierarchies in organizations. These are what organizational theorists should be studying.

Mike Aiken argued that the bulk of organization theory could be characterised as being in a curious state of suspended animation. It was almost as if history and the development of organizations either did not matter at all, or was viewed as a group of contextual variables – which, since they seemed to offer little explanation of variance, were relegated to being unimportant. Yet, like Renate Mayntz (elected an EGOS Honorary Member two years ago), Mike Aiken emphasized that organizational change is both historically specific and the development of organizations and their current constellation of inter-relationships can be seen as the product of power plays carried out over time and often in historically specific episodes or conditions.

Taking his cue from the work of sociologists such as Robert Merton, Mike Aiken questioned the role of organization theory insofar as it seemed to preserve the status quo in organizations. This phenomenon was largely fuelled by researchers looking predominantly at the needs of management or, even worse, taking management’s definition of the problem as the only starting point for research.

In doing so, they ignored other aspects of organization (not least workers and minorities) and presented a highly partial view of what went on in organizations and what were the important processes. It was even more complex. The whole infrastructure of the research process was designed to restrict the imagination of the sociologist. The selection of research questions is carried out by a small and perhaps unrepresentative group - this includes managers and those bodies which fund research.

The dissemination of research is heavily influenced by what is read by academics and what gets into the journals – editors have a powerful screening role (along with reviewers) and decide what is published and what is not to a large extent.

The prevailing contingency school of thought held an overly contrained view of organization according to Aiken. He argued that there was no one way process whereby the environment imposed itself on organizations. In line with Michel Crozier and others, Aiken argued that, first, organizations could themselves act upon the environment and change it; and secondly that any conception of the environment as a homogenous whole was misplaced. Such an environment is in reality a multiplicity of characteristics and has a level of diversity which is unlimited. Such characteristics and inter-actions between organizations and their environments are also dynamic relationships and change over time. To consider them as almost law-like and deterministic is both unrealistic in practice and bad science.

Another source of dynamism lies in the variety of power relations found in most complex organizations. Mike Aiken’s work is characterised by the concerns of the sociologist to uncover the dynamics of power and various interests in organizations. Such a perspective brings topics such as domination, subjugation, coercion, manipulation corruption and extortion to the fore. These are the essence of understanding complex organization and should take pride of place as analytical constructs in the study of organizations.

Given recent events in the world of organizations (such as the collapse of Enron; scandals and alleged corruption and deceit by powerful interests - Parmalat and Shell are well-known examples) Aiken’s work had something of the prophetic quality about it.

The emphasis on power and politics took Mike Aiken in his later work to look at public policy, in particular in large urban conglomerations. His comparative analysis of Urban systems and urban policies (including German, Italian and Belgian cities) remains a landmark in urban and political studies.

Over forty years of contribution to Organization Theory – and not just any contribution, but continually keeping a critical and analytical eye open to question and to stimulate fresh analytical thinking and new perspectives.

A key founding father of EGOS. Without Mike's pressure and energy to get European scholars into a community, EGOS would arguably not be the strong scholarly society that it is today.

But he also knew how to put some tricks of persuasion into practice - Mike was doing work in Belgium while living in Paris. He had a clapped out old Volvo in which he commuted to Brussels. Every time he crossed the border the guards would try to turn him back because the car wasn't roadworthy. He'd talk them out of it by claiming it was the last trip he was making. He must have pulled that trick half a dozen times.

Mike also has musical skills which are perhaps less well-known than his social scince prowess. Colleagues who used to be at Wisconsin tell me that he used to play the banjo at faculty parties when he first came to Wisconsin. I don’t know whether he still plays, but if he does, I am sure it will be to the same exacting standards that he applied to his extensive work in organization theory.

Mike, we are honoured and delighted to accept you as an Honorary Member of EGOS.