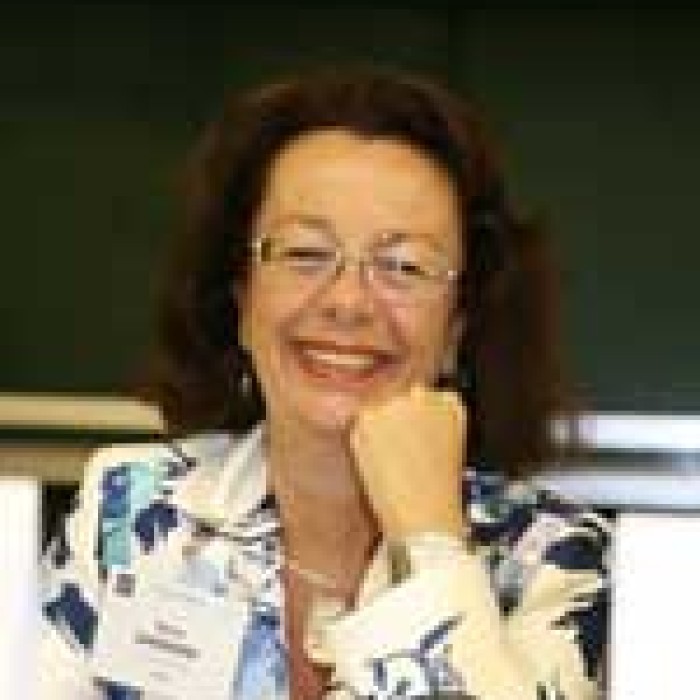 I remember meeting Silvia Gherardi at one of the Valhalla workshops that was held in preparation for the 1991 SCOS conference in Copenhagen. We were getting in or out of a bus, and she was sporting flowery leggings, I remember well. She told me, smiling proudly, that she had just become a grandmother. I looked at her, then at her leggings, and I thought: either my Italian is not as good as I thought, and I completely misunderstood her, or else this woman has a pact with some higher powers.

In time, I have learned that Silvia's granddaughter, Ahania, was indeed born in November 1989. But I still haven't rejected my hypothesis concerning Silvia's contacts with higher powers. Nobody could achieve that much, and do so much, in so little time, without extraordinary help.

Let me begin with Silvia's research record. As a rule, she follows at least two paths simultaneously, and is writing in at least two languages at the same time. (In case you are wondering, she is fluent in Spanish and French, apart from Italian and English.) The first work of hers that I read was Le micro-decisioni nelle organizzazioni, from 1990 (reviewed in Organization Studies, no. 14, 1993). Already there and then one could trace the beginnings of several fields of interest that Silvia would develop over time.

The first was qualitative methodology, in which Silvia invented her own approach – an approach that I would call "replacement". It consists of asking respondents what other people would need to know and do in order to replace the respondents at their jobs without attracting attention. However, the methodological appendix to the book already was a development of a daring manifesto that she wrote with Barry Turner in 1987: "Real men don't collect soft data." (For the young people in the audience I should add that their title was an allusion to the 1982 US bestseller, Real Men Don't Eat Quiche by Bruce Feirstein.) I do not believe that this short manifesto of qualitative methods was ever published anywhere but in the Trento University series, but it soon became a cult object. We all read it, we all laughed, and we all loved it.

Second, and perhaps most important, the micro-decisions' book announced a serious interest in cognitive aspects of organizational functioning, and in occupational communities, which were later reframed as communities of practice, and in cognitive aspects of organizational functioning. These are the matters that she still pursues. One of the recent proofs is to be found in the special 2007 issue of Organization, under the title "The passion for knowledge and learning", edited with Davide Nicolini and Antonio Strati; and in the earlier volume, Knowing in Organizations: A Practice-Based Approach, edited with Davide Nicolini and Dvora Yanow in 2003.

Third, the book mentioned organizational cultures, a topic that Silvia developed further in a 1995 book, which was an epiphany for many of us: Gender, Symbolism and Organizational Cultures. By then we had all read North American feminists with great interest, but with a feeling that not everything was directly relevant to our problems. Silvia brought it to light: gender discrimination, and gendering in general, can take different shapes in different places, and there are cultural aspects to feminism that must be acknowledged.

It's impossible on this occasion present the entire impressive body of work authored by Silvia Gherardi: there are 150 positions listed in her CV, and her 2005 book with Attila Bruni and Barbara Poggio, Gender and Entrepreneurship: An Ethnographic Approach exists even as an electronic book. Yet there is one topic that runs through all her works: the topic of symbolism. Her favorite authors are Carl Jung and William Blake. Deep at heart, Silvia is an alchemist. Thus, the magic forces need to be evoked once more in my speech.

Research and publishing are only two of several occupations to which Silvia dedicates herself. At home in Trento, where she holds the Chair of Sociology of Work and Organization, she is actively running an ambitious and dynamic research group called RUCOLA. RUCOLA means rocket salad, but it also stands for Research Unit on Communication, Organisational Learning and Aesthetics. Silvia coordinates it with her life partner, co-author and collaborator Antonio Strati, who is another constant topic in her life. RUCOLA is an unusual group in the Italian context: it assembles senior and junior researchers working together, it is interdisciplinary, and it is highly productive – in the sense of producing research degrees and in the sense of producing publications in both Italian and English.

Without checking the list of participants, I am completely convinced that if not all, then surely most of the present and many of the past RUCOLA members are here today. The members of RUCOLA have just begun a three-year European project on gender segregation, and this is the second Equal project in which Silvia has participated.

But you are not to think that Silvia stays at home: she also finds time and energy to tour various academic institutions in many European and non-European countries, presenting her research and her thinking. I should add that my boss, Rolf Solli, claims that in his entire career, no presentation has ever made an impression on him such as the one Silvia gave at our School. He even admits that he has a difficult time remembering the main message, so taken was he with Silvia’s art of presentation.

Her talents are recognized far beyond our School. In September 2005 she received the degree of Doctor honoris causa from the Department of Social Sciences at Roskilde University. Silvia Gherardi is the first professor in the Faculty of Sociology in Trento to receive this degree from another university.

And last but not least – that is the last accomplishment of Silvia's I'm going to talk about, not the last of her accomplishments – Silvia has been, and is, a talented, dedicated, and effective organizer of international cooperation. She organizes conferences and workshops in Trento, was active in the creation and maintenance of SCOS, and recently helped to create the Standing Work Group on Practice-Based Studies of Knowledge and Innovation in the Workplace, which she convened at the EGOS 2007 conference. The group is also organizing doctoral schools, and Silvia is engaged in this activity. What is more, she was the first female chairperson elected to EGOS in 1997, and held this position until 2000. Now, Arndt Sorge was kind enough to share with me the backstage of this event. In his words:

"In 1990, I was collecting authors for articles in the International Encyclopedia of Business and Management. I had to organize the writing, reviewing, and improvement of nearly 30 articles for the Organization Behaviour section of the encyclopedia. Silvia was the only author who submitted a draft that was acceptable without any correction, even within the time specified. I was so impressed that I awarded her my personal prize for the best performance in the series, at my own cost, which was a meal for her and Antonio. That memory stuck with me. [...] The next thing is that in 1997, when we were compiling a proposal for the composition of the new EGOS Board at Budapest, the following thing happened. We developed a proposal that did not have any woman on the list. Silvia had heard about this proposal being in the pipeline, and on the riverboat on which the EGOS festivity took place in Budapest, Silvia said to me that if this was going to happen, there was going to be trouble at the EGOS assembly. Aghast at our mistake; food plate and beer glass in my hand, I went to the upper deck to find Georg Schreyögg and tell him about this. He then asked who I proposed to rectify the blunder. I said Silvia should be proposed, because I had been impressed by her reliable writing performance. The other board members were also briefly consulted, and the proposal was changed. [...] The lesson for the presence of females in prominent academic jobs is clear. You do need to talk to the right people at parties, and if things go well, this helps to activate sound comparative judgment of performance even in chauvinist males."

I am grateful to Arndt for sharing with us his recollections, but let me add that my memory tells me something slightly different – namely, that it was we, the women present at the conference and on the boat, who had suggested Silvia's name after a meeting that we held. But as you know, stories of the past always differ, and the important point is that we did have our Silvia in that critical position. EGOS dates back to 1973, but we had first female track conveners only in 1993, and the first female chair in 1997. As Sigrid Quack became the chair in 2006, perhaps things are getting better, however slowly?

But let us make no mistake; it is not for her gender that Silvia Gherardi is to become an Honorary Member of EGOS. Silvia is the heart of EGOS: an exemplary scholar, a dedicated community builder, and a role model for young people. She has a passion for knowledge and learning, which she shares generously with others. I am proud of her accomplishments, proud of her academic generosity, proud to be her friend. Just as EGOS, I have no doubt, is proud of its new Honorary Member.